September 12th through 13th at MIREA University (Moscow), Samsung Electronics Company held the interuniversity finale of the contest of projects in the sphere of Internet of Things. Participating in the event were graduates of 2018-2019 academic year coming from 7 leading universities of Russia. 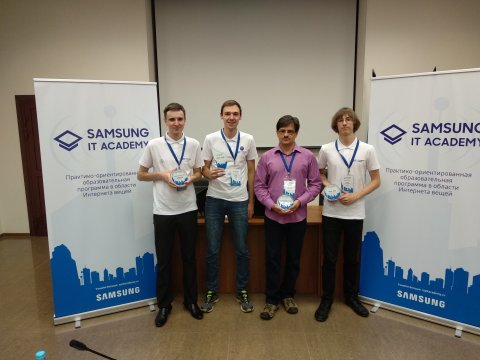 Participants demonstrated 12 projects in such categories as Research and Business and Society. Projects were evaluated by the following criteria: idea, technical implementation and presentation. Prototypes of IoT devices developed by students were exhibited in a demo-zone where both participants and visitors of the event could have a look at them.

In the finale, SUSU EECS Team headed by a lecturer of the Department of Automation and Control, Evgeniy Kanashev, presented three projects:

Upon results of the contest, the project by Sergey Antonov was placed the second in the Business and Society category, and Sergey Kuznetsov was awarded Grand Prix.

Moreover, a special award for The Best Teacher of IoT Samsung Academy has been established this year. It was given to SUSU lecturer Evgeniy Kanashev.